So I have dropped a few hints, and even thrown out a cover a few weeks ago. I am super excited about each of the projects I am working on right now, but I think I am most stoked to be bringing Erik back!

I don't have a release date yet, but I do have the initial cover sketch for the next book. Hope you like it.

Keep checking back as I will put updates and a release date as soon as I have it! 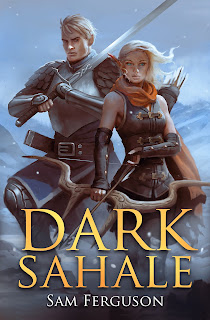 For those of you who haven't read through Erik's previous adventures, be sure to check them out! (Although it isn't necessary if you want to start with Dark Sahale... your choice.)

This year has started off a bit weird!

I ran into a bit of a wall in terms of my powerlifting, so I had to cancel my trip to Atlanta for the National Championship next month. I'm super bummed about that, but it is what it is. Essentially just ran into a cash and timing issue. That's just how life goes sometimes. Still, I do have a couple of gold medals for the state championship and the regional championship, so I certainly can't complain about how far I have come in a little over one year of stepping back into training.

The next thing on the plate is that we're moving. So, the joys of house hunting have been eating up a lot of time. We had thought we would be in our current house for at least a couple decades (I moved around a lot growing up, so I wanted to be a little more stable in my adult life...) but it looks like we'll be moving out this summer.

And then there are the writing projects. Some have been great. I really enjoyed Eye of Tanglewood Forest and I think it brings a lot to the world of Terramyr- and some have not been so great, like needing to redo Fur Trader 2. Then there have been some fun things thrown into the mix that I hadn't been planning on, like a couple new Erik Lokton projects, and a funky new urban fantasy I have been working on. I never thought I would do an urban fantasy book... but it has been a lot more fun than I had anticipated. A little harder too as it requires some research on real world places and legends etc., but fun. There's something about taking the known world and creating a fictional system within it that has been pleasant to experiment with.

And, as if it wasn't challenging enough to work in a new genre, it's going to be in first person, which makes it an entirely different animal from all of the other novels I have worked with. Hopefully the rest of you will like it. I haven't gotten all of my editor's feedback for it yet... so I am not sure what the timeline is for it, but I am hoping it will be nearing the final stages fairly quickly.

Also, I have been asked by several of you about the next Dimwater book. YES, there is more to come... but I don't have a timeline yet. The next Dimwater project is in the early drafting stages and I am not sure when it will come. I can promise I won't be super slow, but it takes a bit of time to develop so it certainly won't be this summer.

And, just because there isn't enough going on right now... there is a game developing company (which shall remain nameless at this point) working on two games set in Terramyr. I don't know all of the details about the timeline, but I was consulted on it and had a lot to do with it's development so far. Both are RPGs that are set in the same location as Jonathan Haymaker... though they are at different periods of time, so they aren't game versions of the books, but rather an extension of the world that uses some of the history and themes from the Haymaker Adventures series. Still cool though. If the larger RPG gets officially greenlighted, then I will be doing the story writing and planning so it will officially fit within the World of Terramyr canon.
Posted by Sam Ferguson No comments:

Enter the Drawing for a FREE audio book!

All right, listen up! If you like audio books, I have gotten a hold of several copies of Dimwater's Dragon, The Dragon's Champion, and Jonathan Haymaker audio books. I plan on running a drawing at the end of this month to give away those copies!

All you need to do to get your name into the drawing is sign up for my email list. Just fill out the form on the right of this page. Good luck!