My Debut Novel- The Dragon's Champion

I am very pleased to announce that my debut novel, The Dragon's Champion, is now available.  Print version is 288 pages and costs $7.50, while the Kindle version is only $2.99 (or free to borrow if you are an Amazon Prime member).  The Dragon's Champion won an honorable mention in the League of Utah Writer's YA manuscript category in 2012.  Cover illustration is by Bob Kehl. 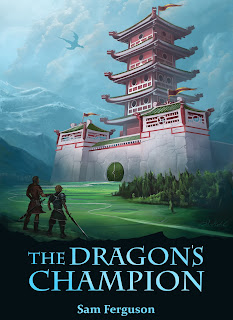 In the middle of his arduous training in Kuldiga Academy, Erik Lokton discovers that he is destined to become more than a mere knight. His inexperienced eyes are forced open as demons and evil creatures that had previously only haunted his nightmares awaken, and old feuds boil to the surface once more. However, Erik lacks the discipline of a seasoned knight and despite his growing knowledge of the dark forces at work in his world his curiosity and headstrong ways get him into trouble. With the help of a master swordsman and a few friends, he must learn to balance his duty to family with his destiny and responsibility to his kingdom. Yet, not all friends are true, and old debts are coming due. Erik must choose between rescuing his family, and extinguishing the crimson tide of darkness that threatens to swallow the whole realm.
Posted by Sam Ferguson No comments: